Guess what day it is, that's right, it's Amerta's death day! Originally, I wanted to wait until the 28th of October to publish For Amerta, but I got impatient lol

I know there's technically already some notes inside the game itself, but I like talking more in-depth about my projects, so you're getting this behind the scenes post again whether you want it or not. This project did tire me out when I was developing it, but ultimately, I did not regret creating For Amerta at all.

After the release of Sweetest Valentine, I've been dead set on wanting to make another visual novel, because man I do have a lot of ideas that I want to try out. I cycled through and even dumped some of those ideas, and in the end, for this year, I ended up with For Amerta.

Originally, For Amerta was intended to be way, WAY more tragic than it ended up being. I didn't plan on having three main characters. It's just Rendra and Amerta.  No Kai, no Mr. Ari,  no parents. The story is drastically different too. It was intended to be a sad story about Rendra and Amerta, the outcasts of the school, who always hangs out with each other. Then Rendra found out that Amerta has been dead-- only for Rendra to later find out that he's also been dead for a while. So the entire time, he's a ghost. I planned for it to be a short, five minute linear visual novel.

And then I keep changing my mind on it and adding more things to it. The time loop and hallucination aspect was added because I keep thinking back on Yuzuki's route in Sweetest Valentine. That route keeps eating on me because I feel like I can pull it off way better than I actually did, so I tried doing the same trick here. But in the end, that kinda contributed to my worries for the game. I ended up thinking that people might find the unreliable narrator trick too similar to Sweetest Valentine and that they might get bored or something. While some did say that it's similar, I'm glad that people have been enjoying For Amerta so far.

Anyway, getting back on track, I needed a character to ground Rendra because no one else could or had the courage to, so Kai was born.  Here are some early sketches of the three 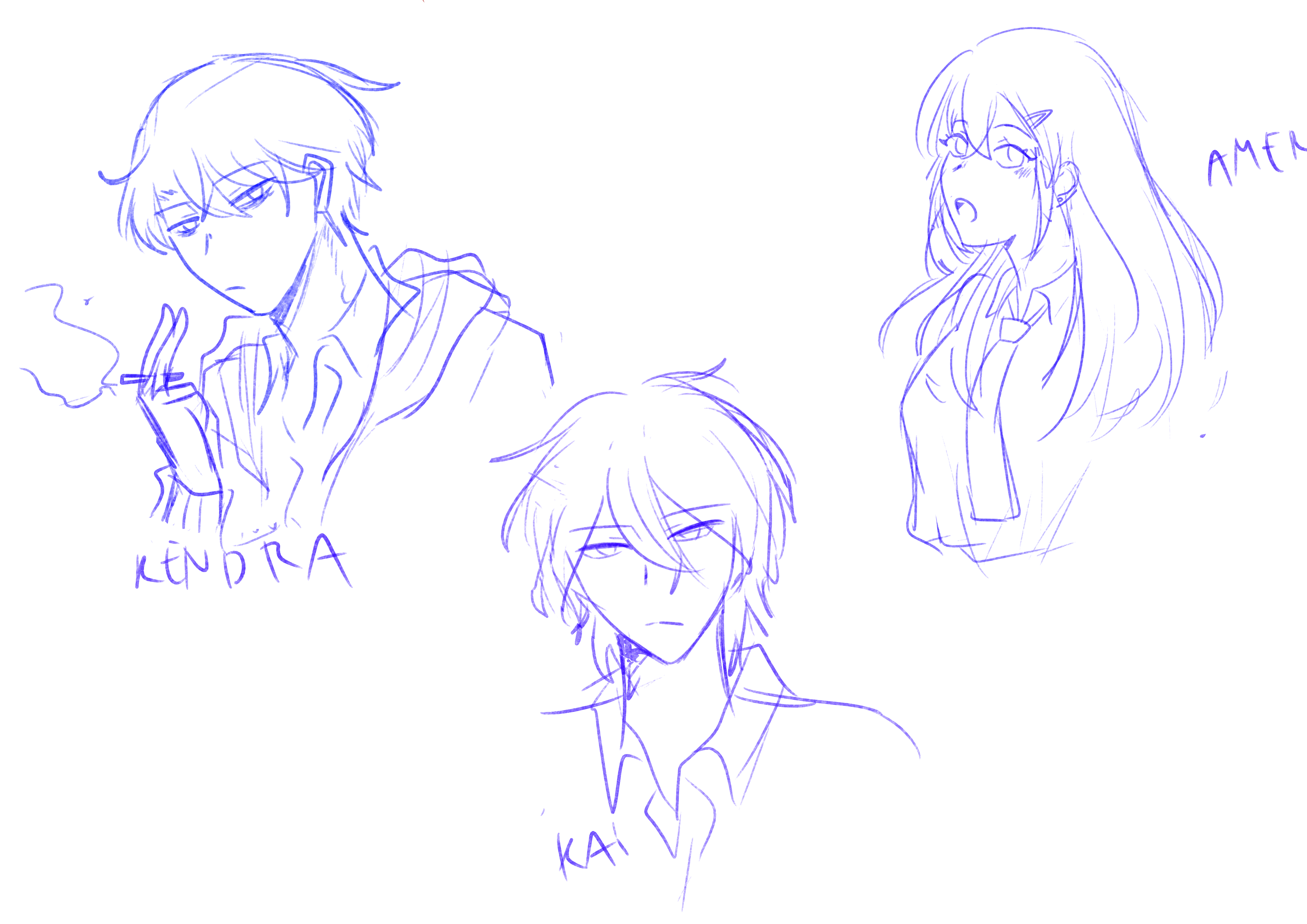 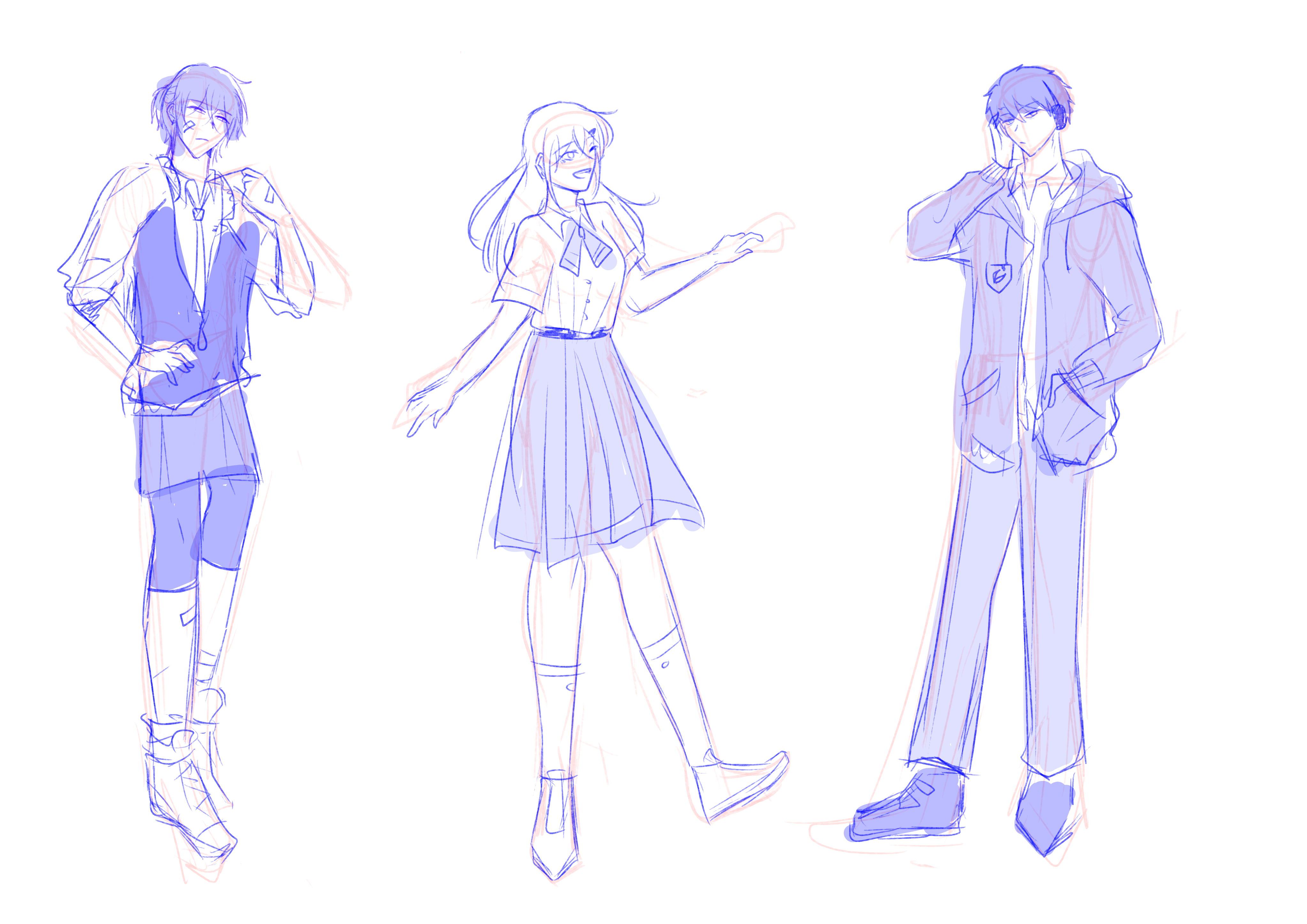 Fun fact, at first, I wanted to make Kai a girl and a tomboy-ish character because his character was inspired from a character in a korean webnovel titled Omniscient Reader's Viewpoint (the character that inspired me in particular is Lee Jihye, she's such a badass) . Changed my mind on it though, I honestly don't remember why, but he's now a carefree dude instead.

Rendra also had quite the change from his initial character. He was supposed to be a weeb, but colder and more intimidating. He's more of a delinquent and even smokes. 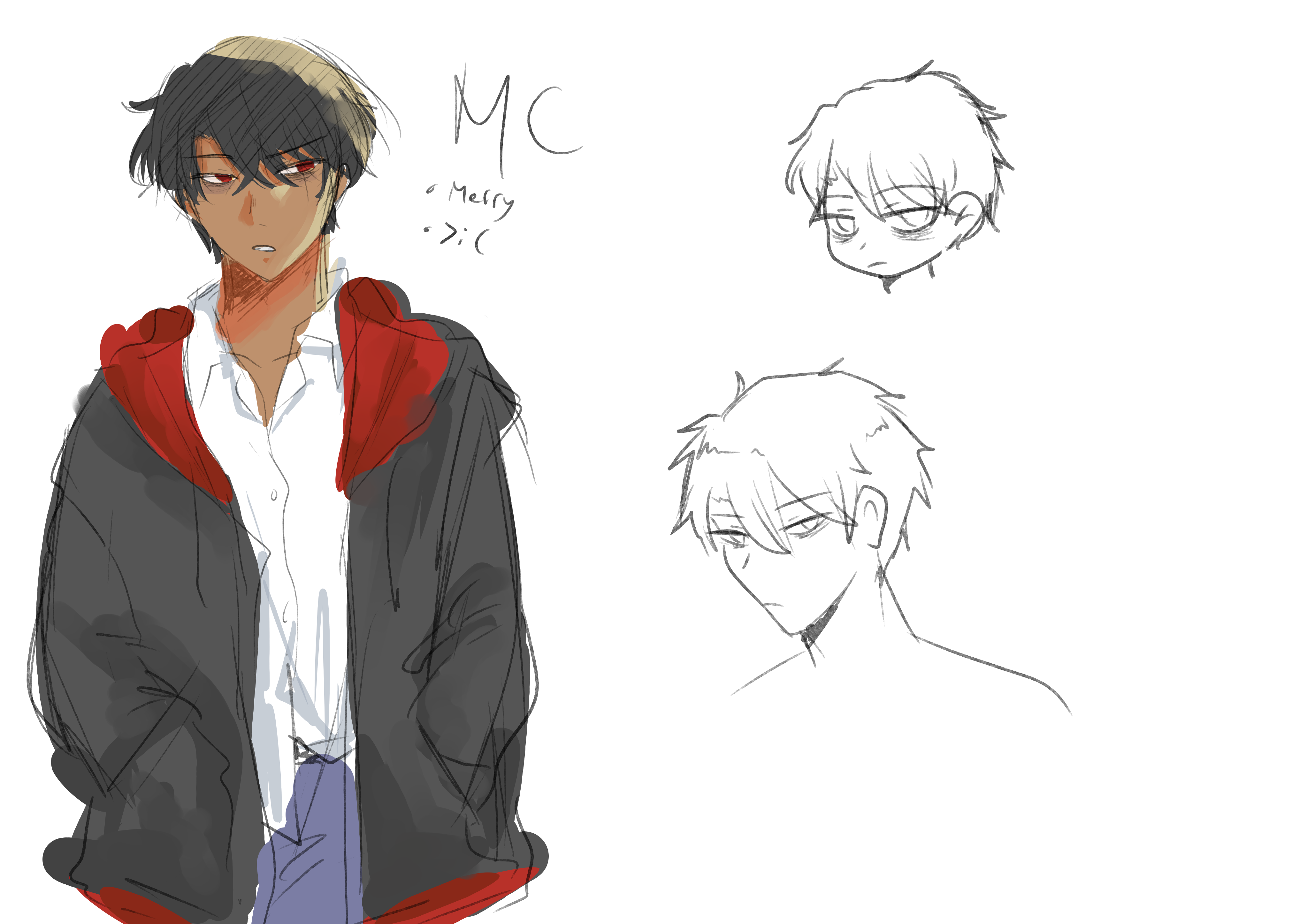 In the end, he ended up becoming a quiet diligent student who becomes warm around the people he cares for. I feel like that character suits this story more. The delinquent backstory is instead passed onto Kai.

Amerta did not change a bit. I've always wanted her to be bubbly, cheerful, and expressive to contrast Rendra's personality.

So after I feel like I'm done brainstorming the characters' looks, I went on and sketched their sprites beside each other.  During the development of Sweetest Valentine, I did the spites separately (I drew all of Ichigo's sprites before even sketching the others, big mistake), so they may look a bit janky and weird when I put the sprites side by side. This time, I tried to sketch all the needed sprites together side by side first, and this approach is indeed way better. 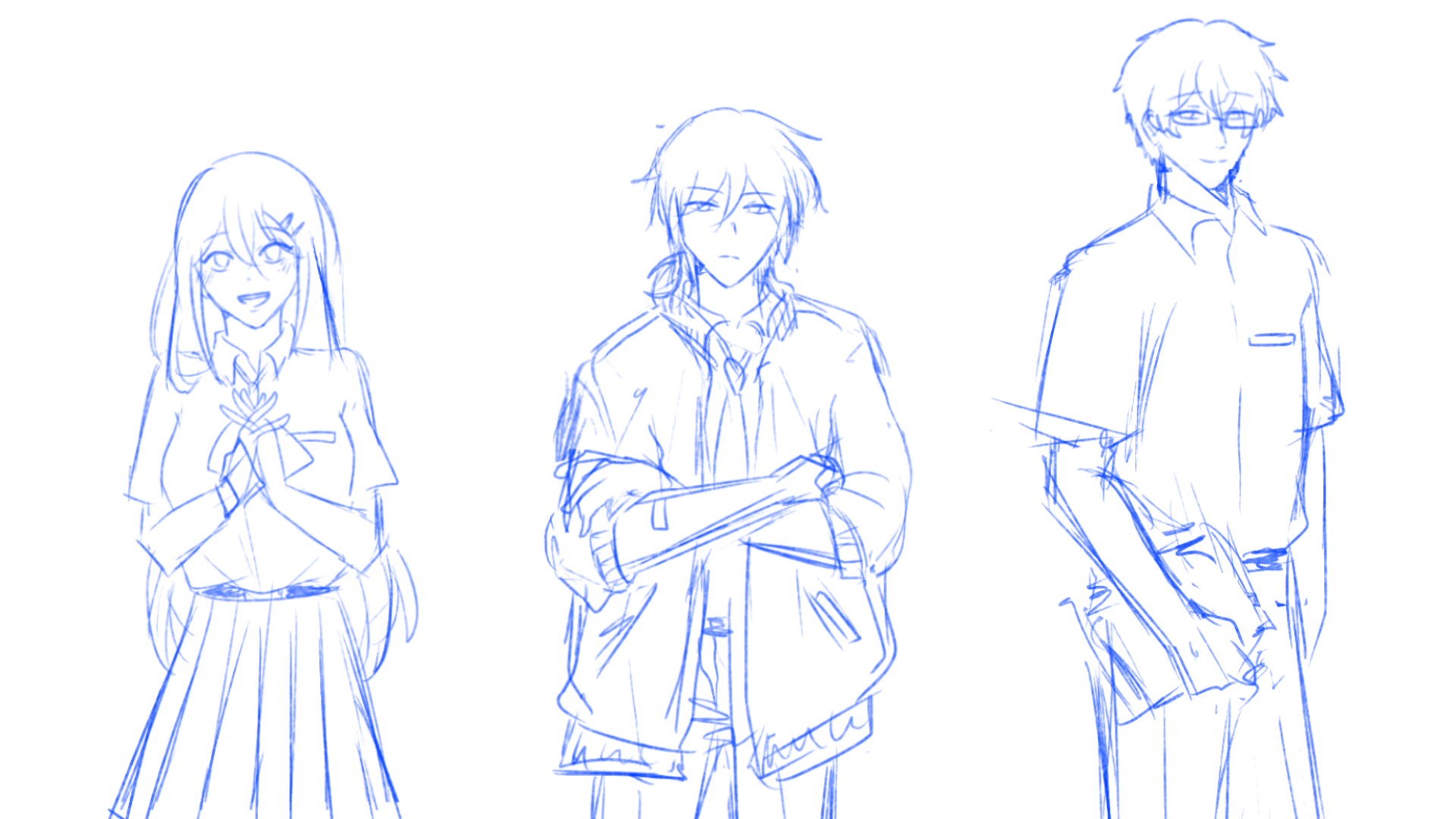 When the sprites are done, I got into writing. Before, with Sweetest Valentine, I switch interchangibly between doing CGs and writing the script. That was a BAD IDEA, I want to punch my idiotic past self so bad for doing that. Because then when I want to change a scene in the story, I won't be able to bring myself to do it because I've done the CG for that particular scene. So this time, I focused fully on the script and only sketched the CGs instead.

I say that, but honestly, there aren't that many changes happening. The only major one is Ending 3, the ending where Rendra got hit by a car in front of Kai. Intially, I wanted Kai to go mad as well 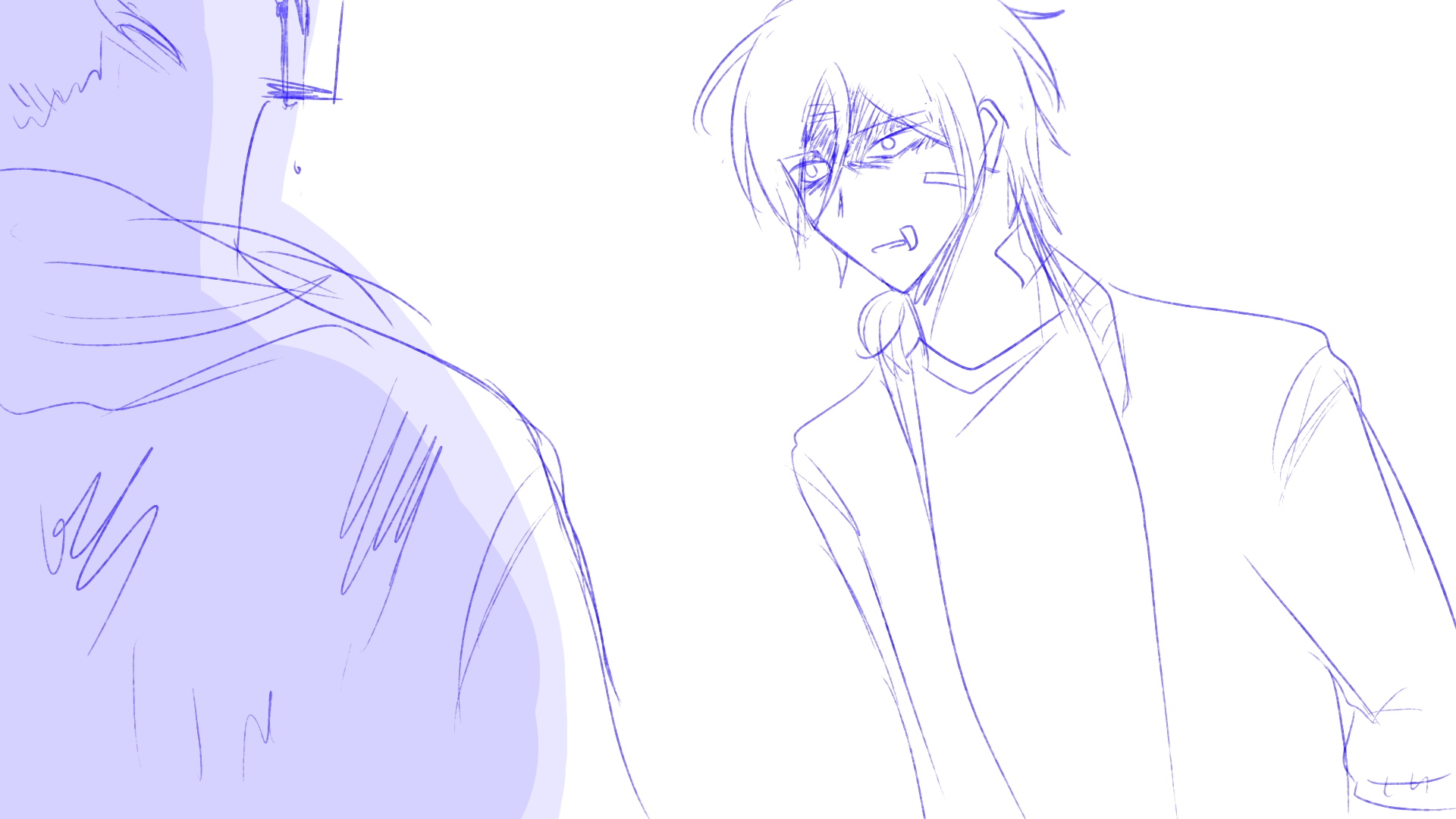 And this was the CG sketch I did for it. I don't really like that though, because I feel like making Ending 3 more bittersweet. So I discarded the Kai going nuts ending lol

Now, onto the biggest reason why I had the burnout in the first place; coding, Some of you might think that I'm being overdramatic, after all For Amerta is a simple ren'py game that takes no longer than an hour to beat, and maybe you're right. All I did was copy paste codes, but I still got frustrated anyway. At one point, some progress of the game got erased because I did an oopsie while trying to code a gallery album for the game, and I was so pissed I started hitting myself LMAOO

But through that mistake, I was able to learn to create backups more frequently and this time, I actually know how to properly create a gallery album. No pain no gain, I guess. Creating a switching menu also ended up simpler than I initially thought. But even so, I honestly just find coding to be tedious, it's just not for me, tbh.

I did the CGs last. I ended up feeling pretty proud of most of the CGs I've drawn though, unlike with Sweetest Valentine. The fight scene in particular worried me, because I suck at anatomy. However,  drawing the fight scenes ended up being one of the most fun I've had while developing the game. It's not the best CG ever, sure, but it lifted my spirits up again, and once again I've become excited trying to finish the game.

Oh, I need to thank my friends for putting up with playtesting this game a few times. My best friend, Alouette pretty much played the game like thrice and I'm sure she's sick of it (jk, but we're both sick of listening to car crash sound effects now, that's for sure). Vieno, a vtuber friend of mine, also deserves credit for playtesting the game and listening to my whinings throughout the development (oh, he also streamed it on twitch too,  he's way too kind ;-;). These two amazing people will not read this, I don't think, but seriously, these two helped a ton and the game wouldn't be here if it weren't for their help.

I poured a lot of myself into For Amerta, from the setting to the characters. I guess you can say that the three main characters are basically different parts of myself, but modified slightly. So the story is way more personal to me than Sweetest Valentine is. That's also why I was worried, because it's kind of embarrassing to put yourself out there. Well, most of my worries disappeared as soon as I published the game though, so that's nice. I've had a good rest for an entire week after I published the game.

Oh, and please don't misunderstand. While there are a lot of regrets during the development with Sweetest Valentine, I don't hate my own game. Ultimately, I'm happy I published the game and it got that many attention in the first place. Most people here knew me through that game, so I'm forever grateful to Sweetest Valentine.

First of all, I think I'll try translating For Amerta into Indonesian since the setting of the story is in Indonesia. I don't know how long that'll take, or if it's going to be worth the effort, but I wouldn't know until I try. I might as well try to train myself writing stories in my native language, you know?

Other than that... I feel like most people followed me for more yandere/horror romance content. If that's the case, then good news, I am planning on making another one of those (those who followed my insta might have seen some sneakpeeks of it already, I made an insta story about it like once lol). I might release it next year, or two years from now, I don't know. Things are kind of hectic right now. I don't want to show or promise too much in case I changed my mind again. For now, I guess I can show you a random sketch I did for it.

Edit 21/01/2023: Yeah um- you won't ever see these gentlemen ever again because I kicked them down into the flames and decided that their story isn't good enough I'M SORRY FOR MY INDECISIVENESS One day I will actually tease about an ACTUAL project. One day.

Jesus you read all that? Thanks a lot! This post is honestly very messy. I sure hope my one brain cell ramblings are at least entertaining or informative to read.

Speaking of, halloween is just around the corner, isn't it? That means Sweetest Valentine will turn one year old in just a few days, that's crazy to think about. I might make a devlog about that, even though I don't really have much to say.

Anyway, once again, thanks for reading! I hope you have a nice day and I wish you all the best in life! Until we meet again! :D

Again and again, just to save her.

I really enjoyed reading your behind the scenes posts! I've played through both of your games and there's a certain charm to be found in both. Although coding is not always enjoyable for everyone, I commend you for sticking through it!! Thank you for creating both games :D

Aww thank you so much! I'm happy you enjoyed both of my games and these behind the scene posts that I wrote during midnight with one braincell LMAO

it’s honestly really fun to read about your journey and thought process while making these games, especially the coding bit because even copy-pasting stuff can be so tedious and honestly just straight up confusing because what worked for someone else’s work might yield different results for you ;-;

both of your games hold a really special place in my heart tbh, they’re both really unique, interesting stories with wonderful characters and just !!!! it makes me love your games even more if that was even possible :D

although i’m super excited for your next game, please take care! happy halloween!

I'm very glad that you find it fun to read! And yeah goddamn I hate it when a code supposedly works but just doesn't for whatever reason when I pasted it LMAOO

Aww thank you for your kind words tho!! I'm really happy to know that my games mean something to someone- if I haven't said that enough already haha

You too, raazberry, take care of yourself and happy early halloween! Hope you'll have a good one! :D